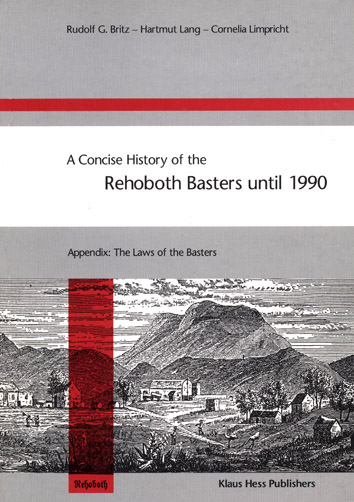 Rudolf G. Britz, Hartmut Lang, Cornelia Limpricht
A Concise History of the Rehoboth Basters until 1990
Appendix: The Laws of the Basters

In 1870 a group of Basters settled down in the midst of then South-West Africa at Rehoboth and the surrounding region ("Rehoboth Gebiet"). Led by Hermanus van Wyk and accompanied by the German missionary Heidmann, for two years they trekked out of the South-African Cape colony to the north. Henceforth they considered themselves as an independent ethnic group, the Rehoboth Basters.

Their history is marked by ups and downs: They proclaimed laws of their own, maintained their self-government and clashed with the respective colonial powers (Sam-Kubis in 1915 and the Rehoboth Rebellion in 1925). Even during Apartheid in Namibia, when they contributed to the development of political parties, they retained competence for their own affairs in their "Gebiet". It was as late as in 1990, when Namibia became independent, that this status came to an end.

This book presents the first coherent historical description of the Rehoboth Basters until 1990. Co-author Rudolf G. Britz (born in 1931), a school inspector and teacher, is himself a Rehobother. Hartmut Lang (born in 1943) is a lecturer with qualification in the field of ethnology, and Cornelia Limpricht (born in 1957) is a doctor of art history. Both live in Germany, and for many years they have been working on Rehoboth, and they have many personal contacts there.